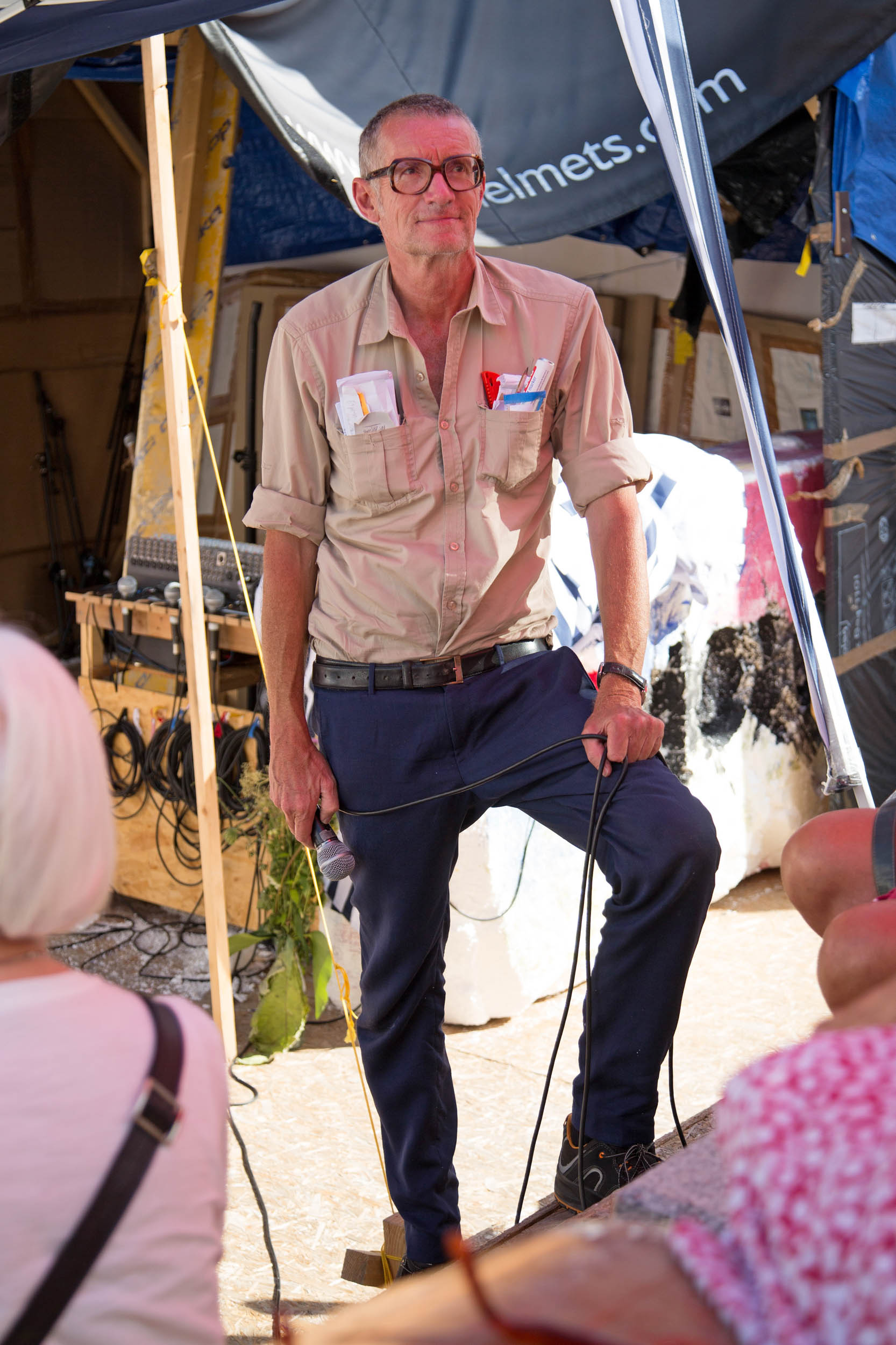 is an artist born in Switzerland and living in Paris. Out of his numerous exhibitions and works in public space, the Gramsci Monument 2013 in the Bronx, New York endorsed his position within the international art world.

Since 2019 at the Engadin Art Talks, Thomas Hirschon has intensively engaged with Simone Weil. The denʞkollektiv thanks Thomas to present seven art works: (1) Me, She, (2) Simone Weil Map, (3) Médaillon, (4) Cover for ‘Die Weltwoche’, (5) My Dreams, (6) SW Annabelle, and (7) Eternal Ruins. For more information visit: www.thomashirschhorn.com 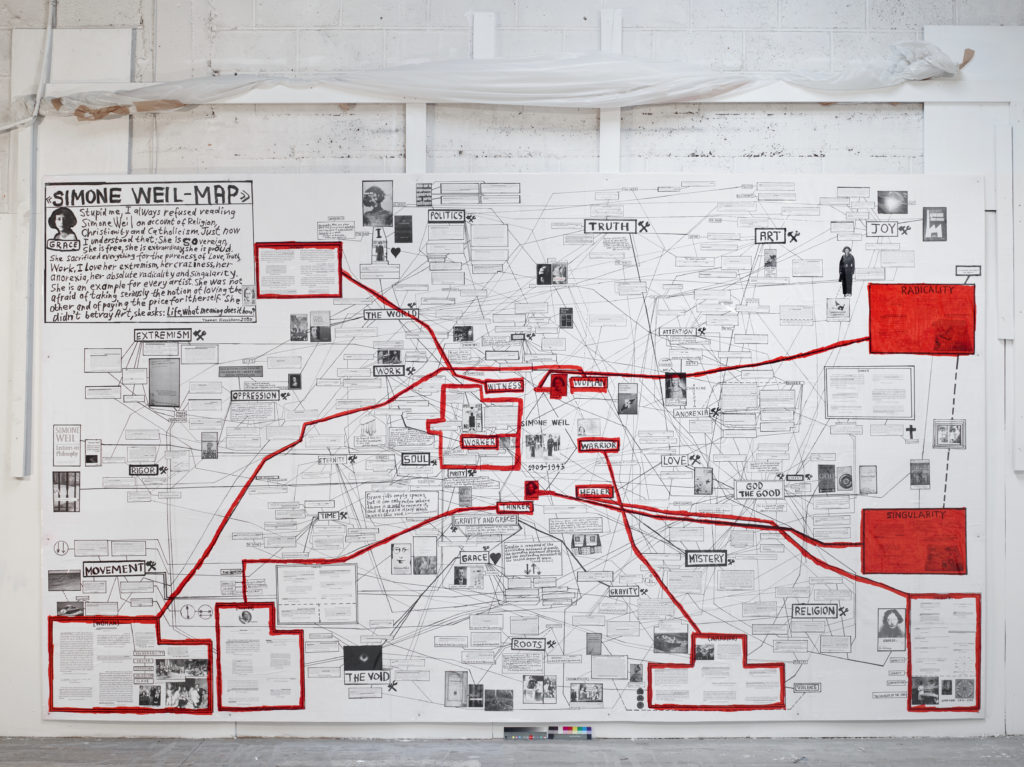 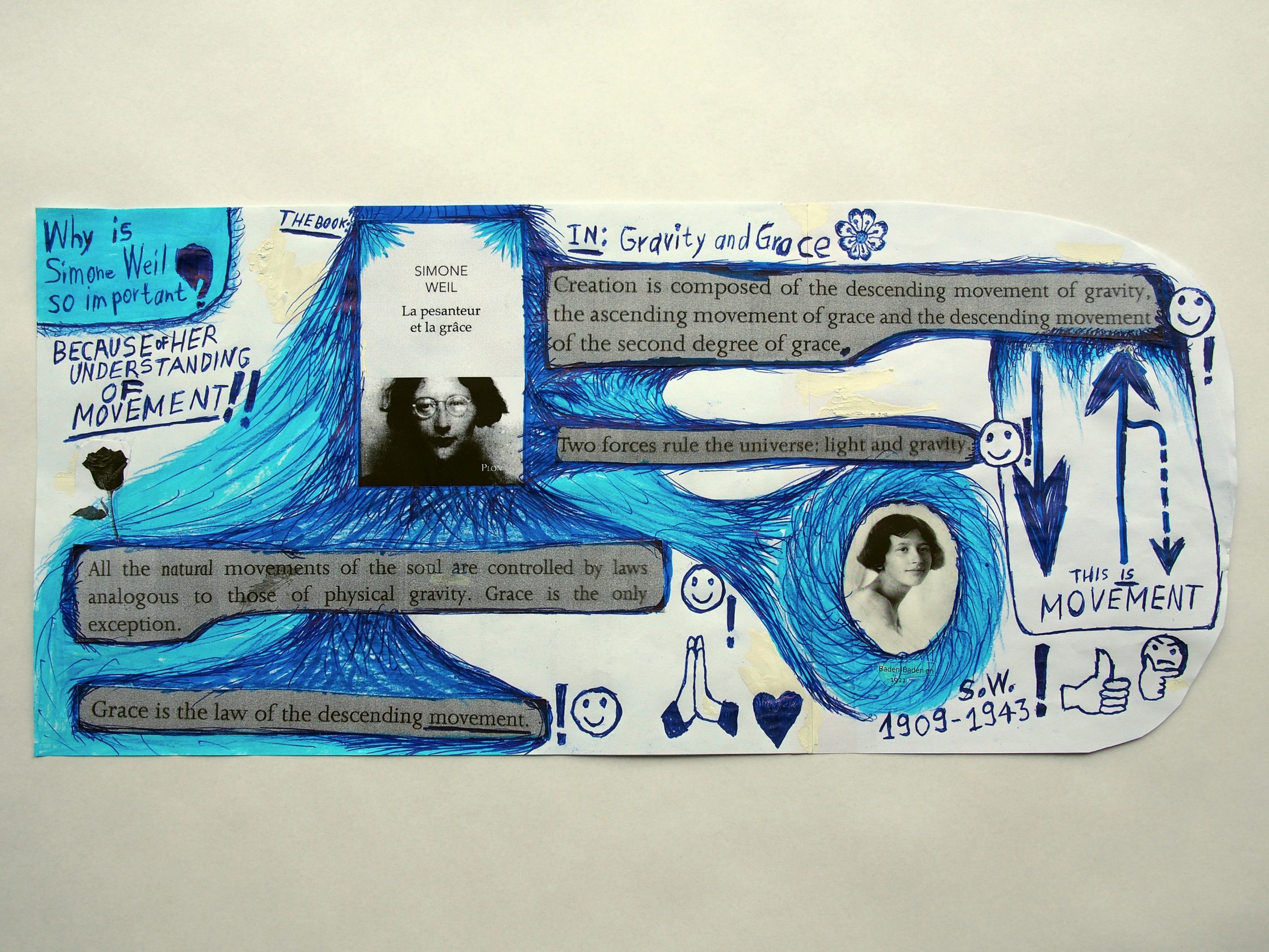 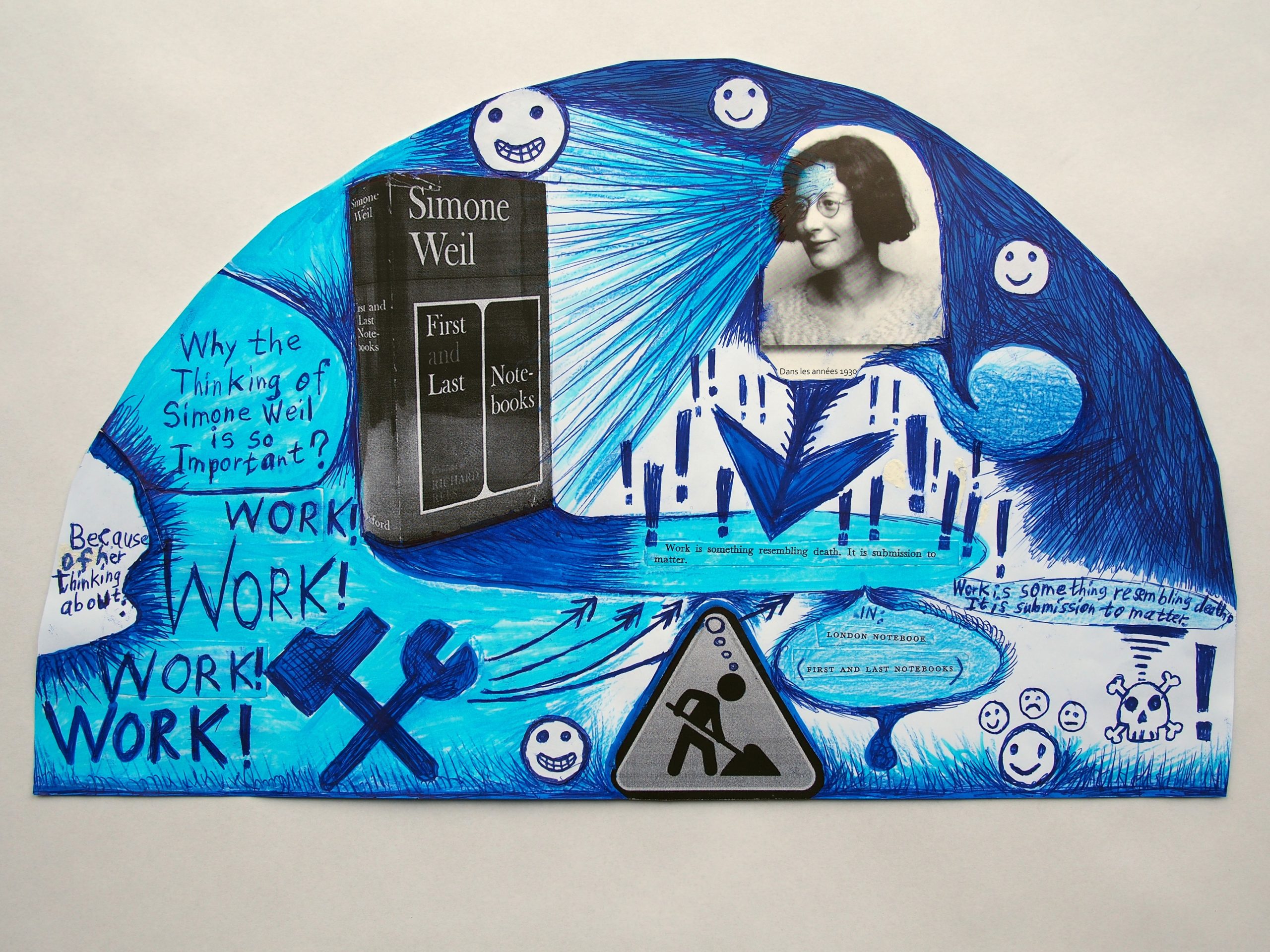 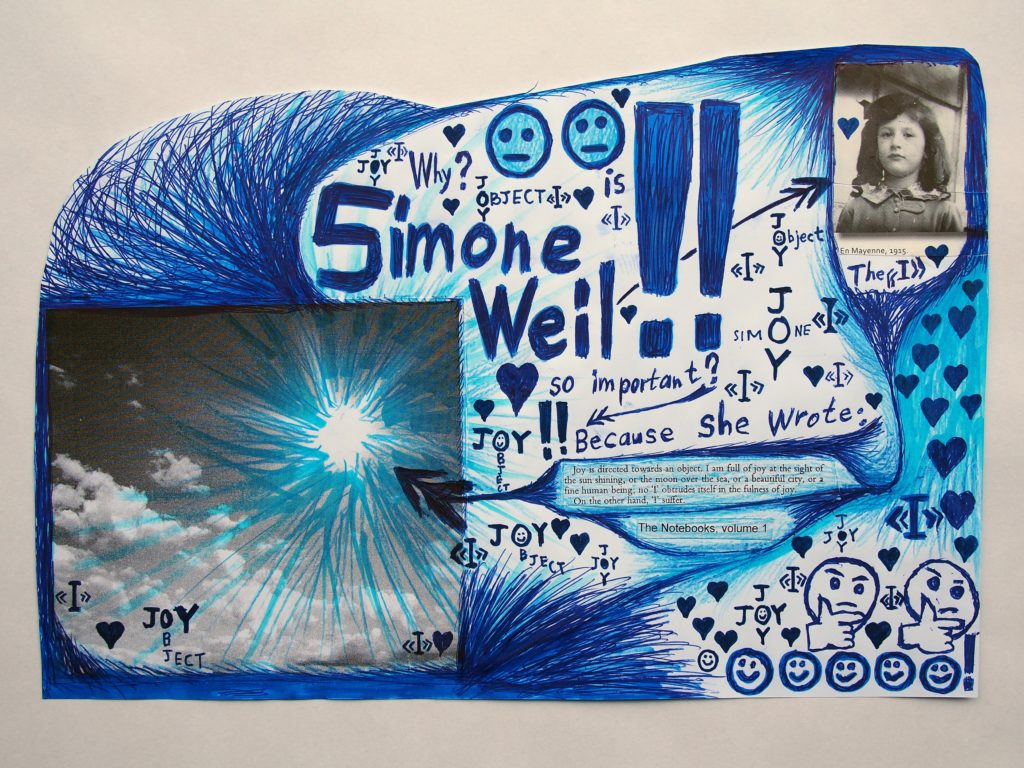 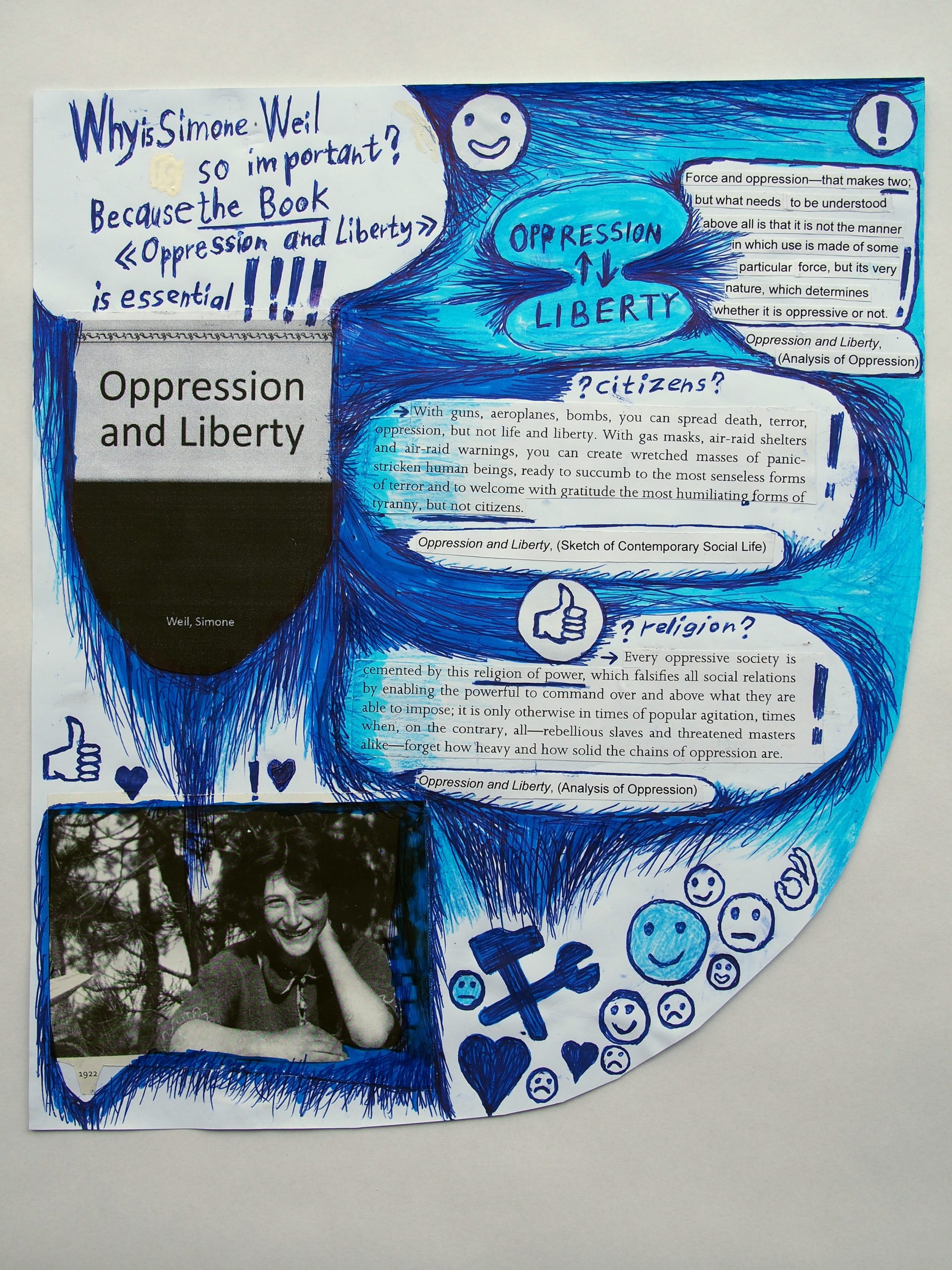 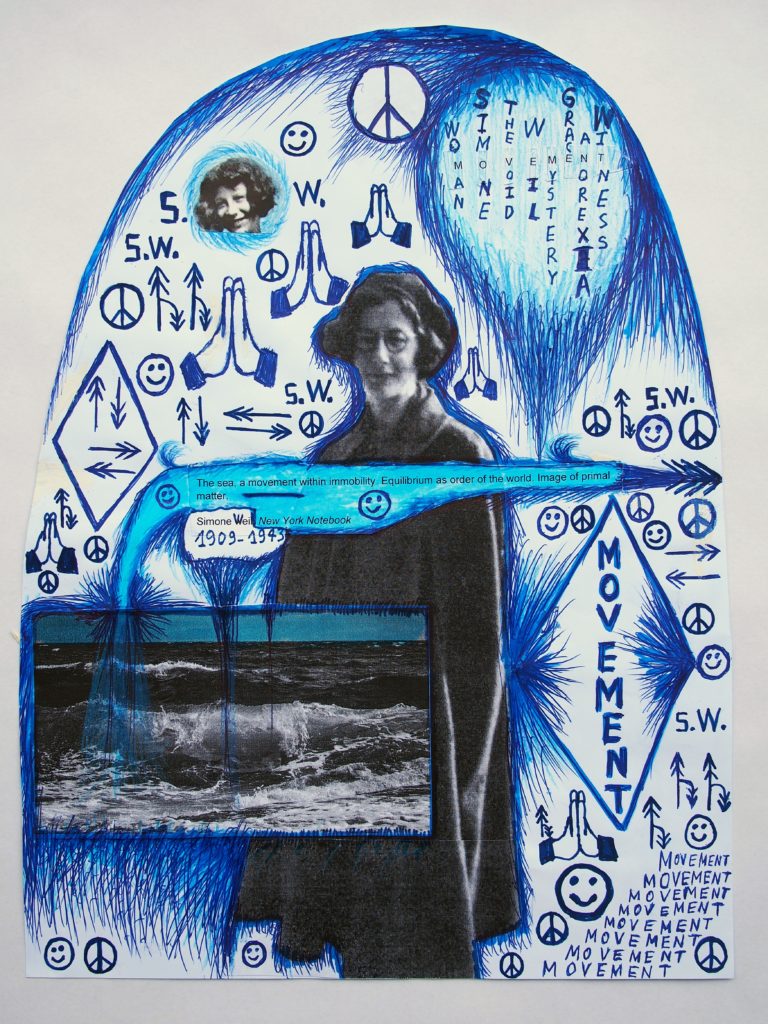 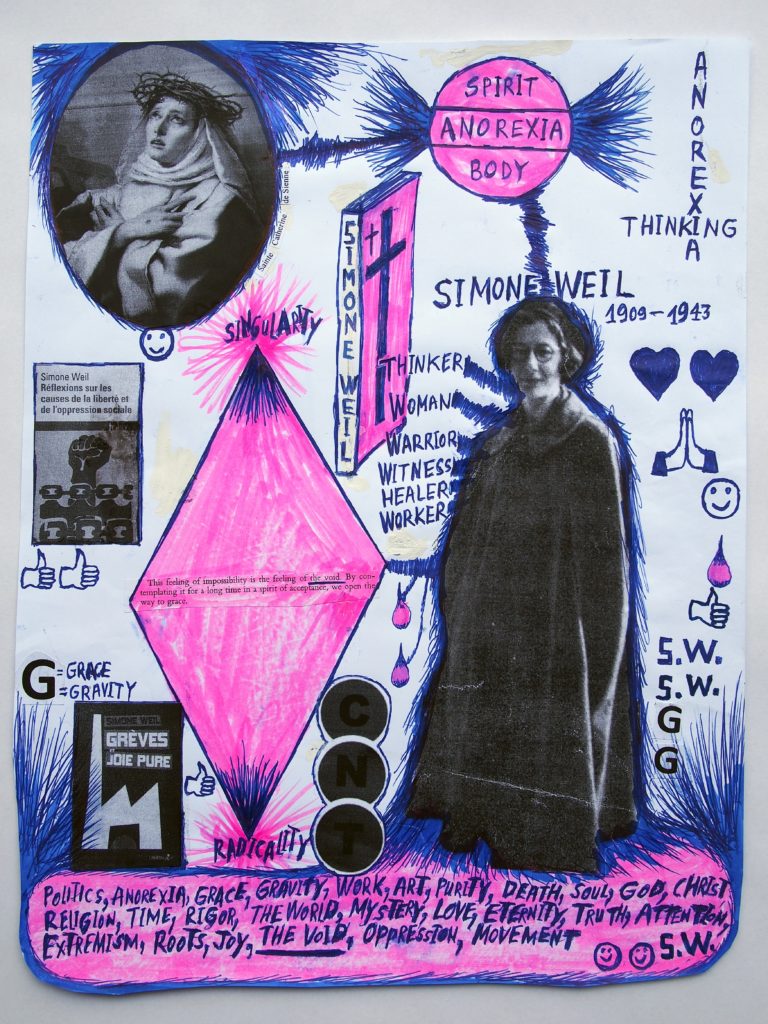 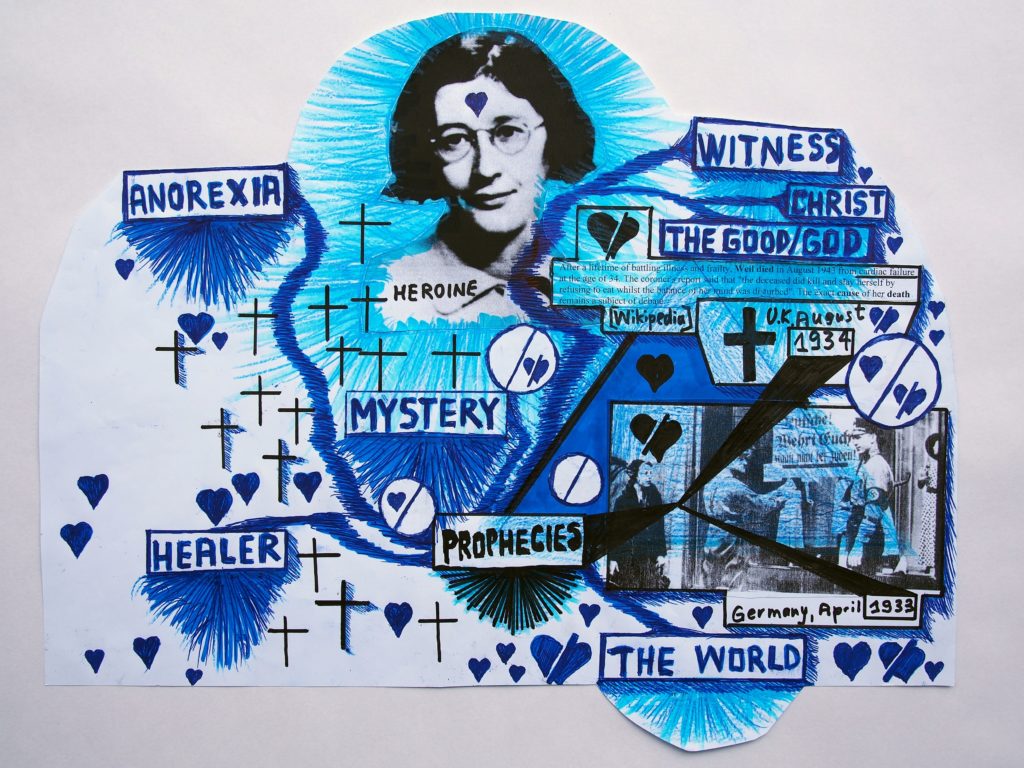 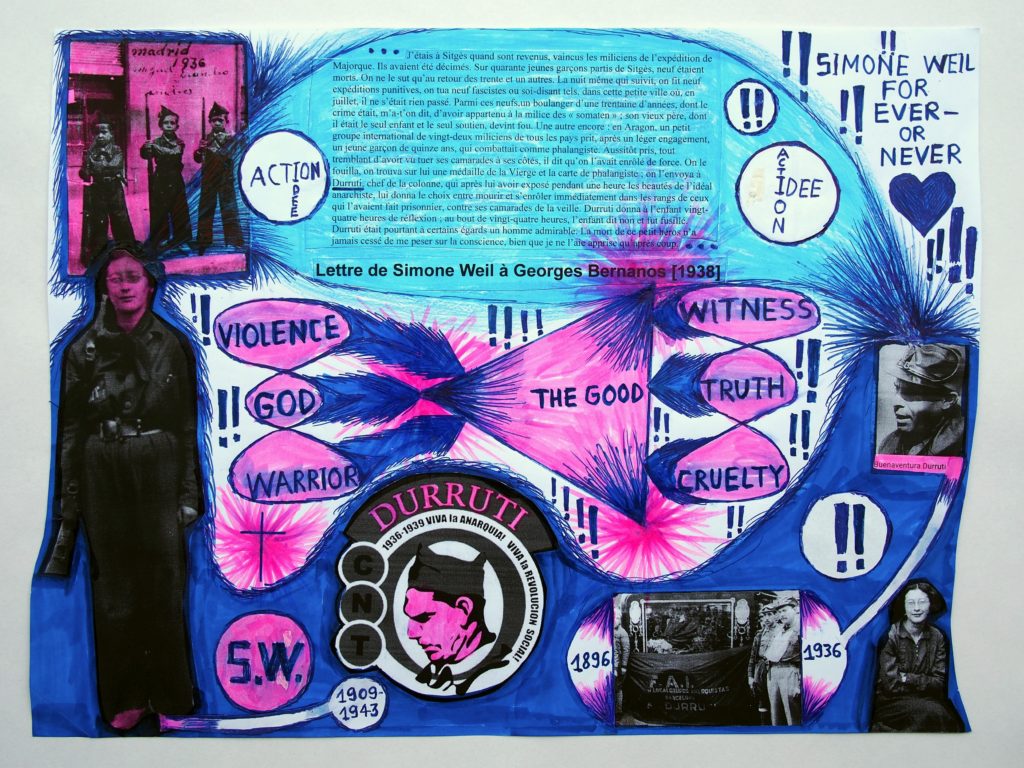 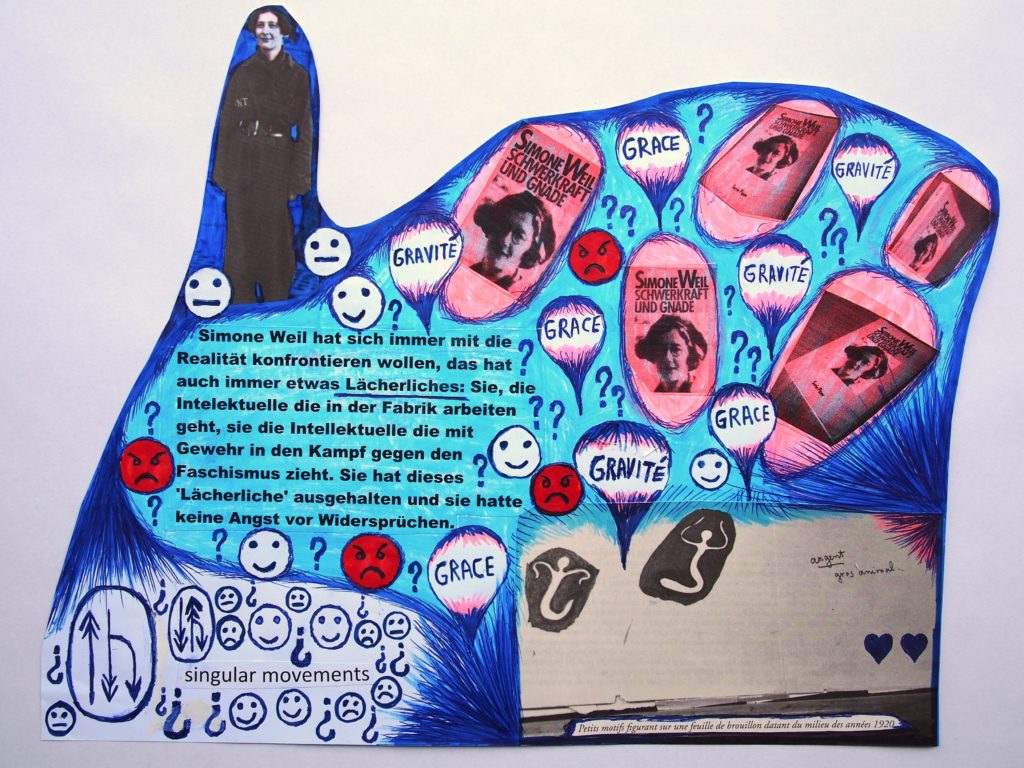 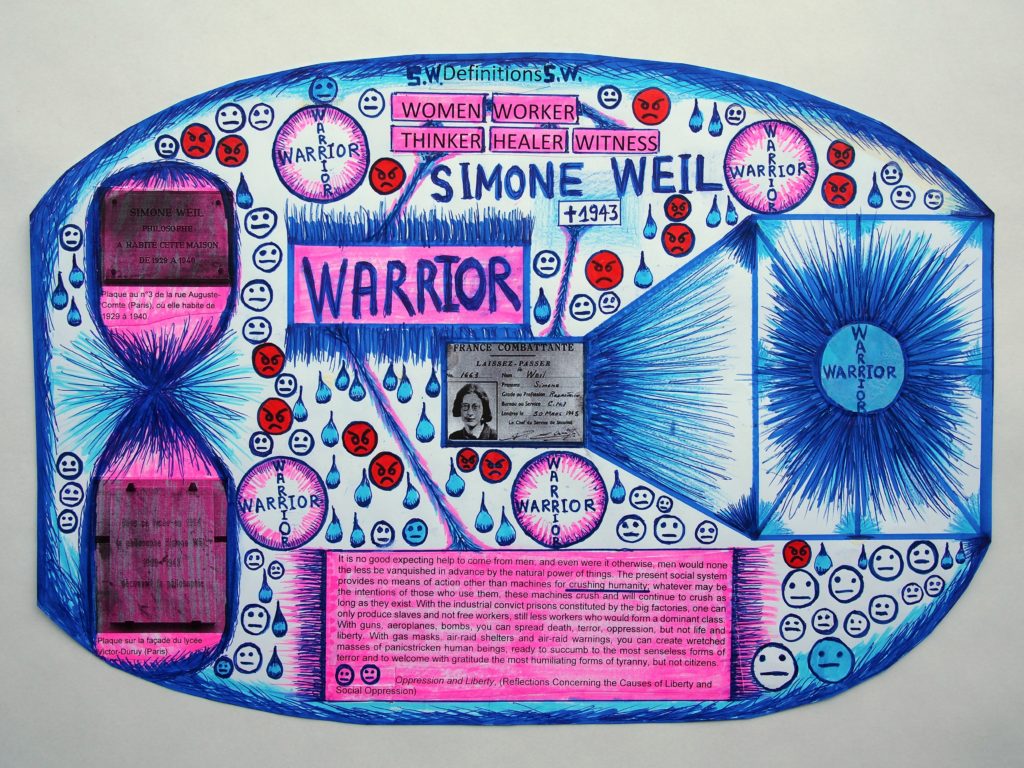 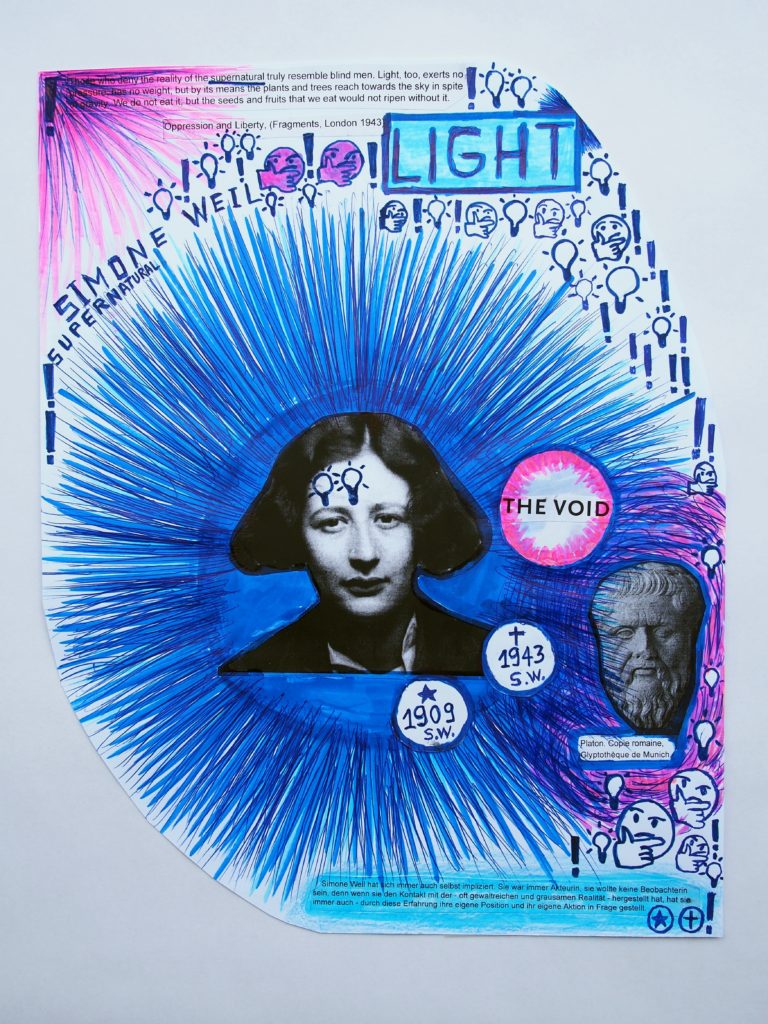 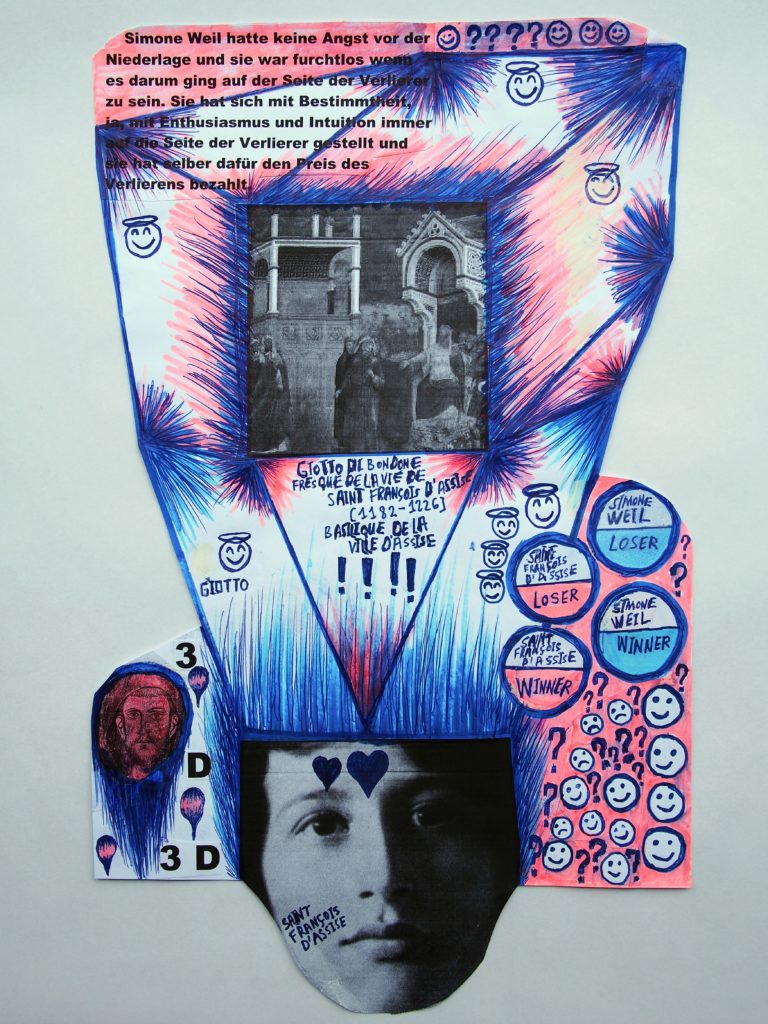 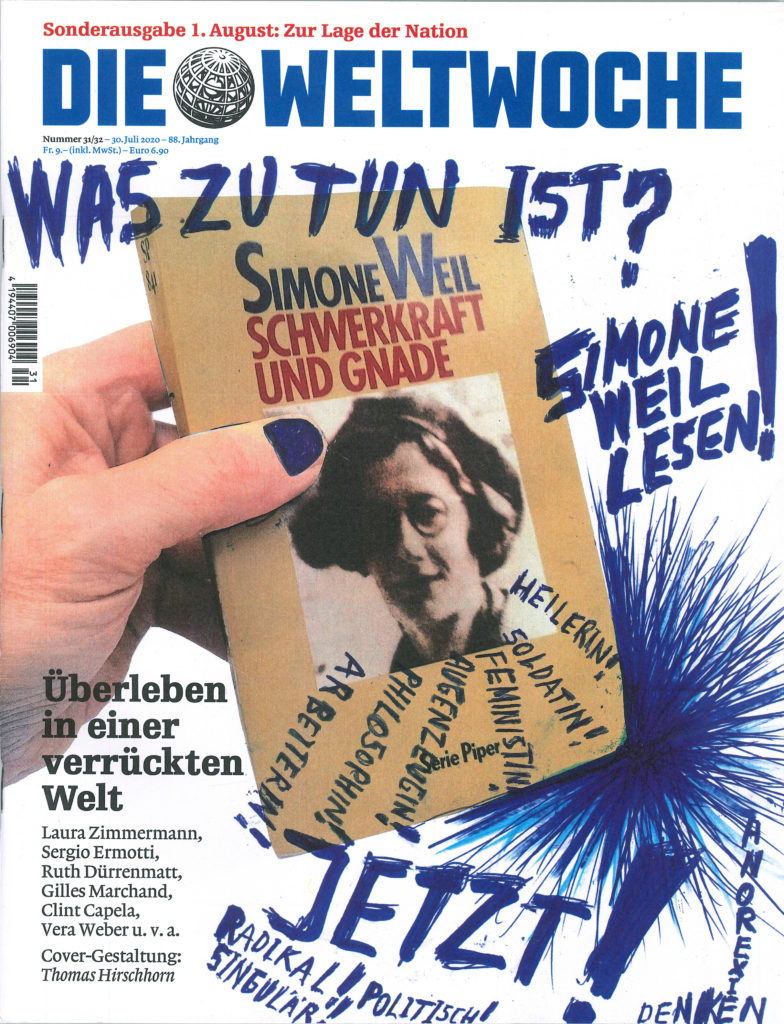 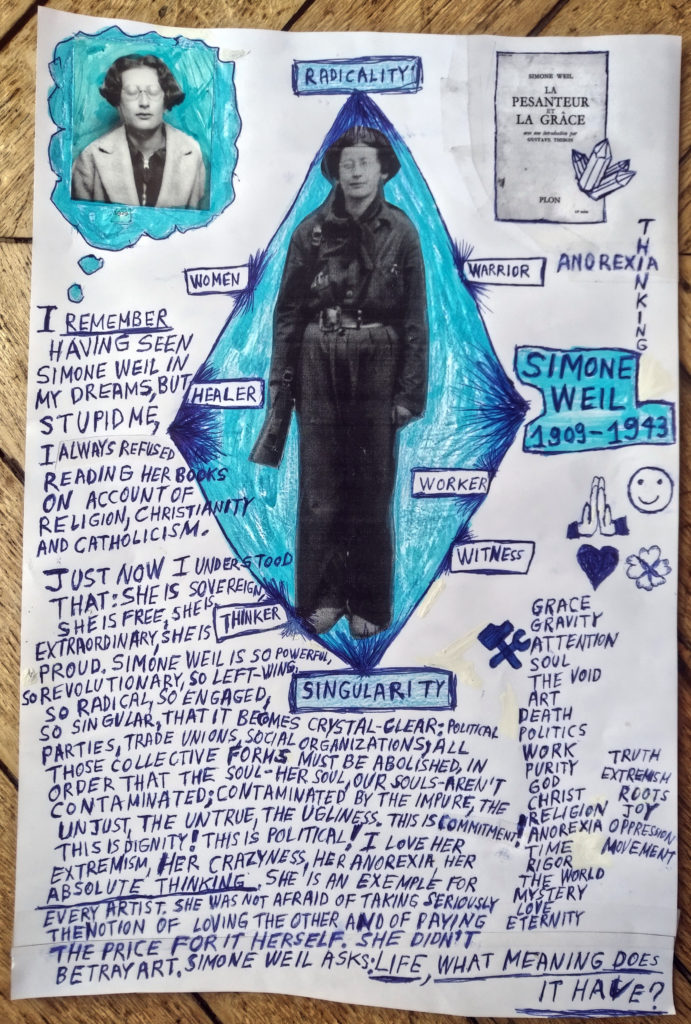 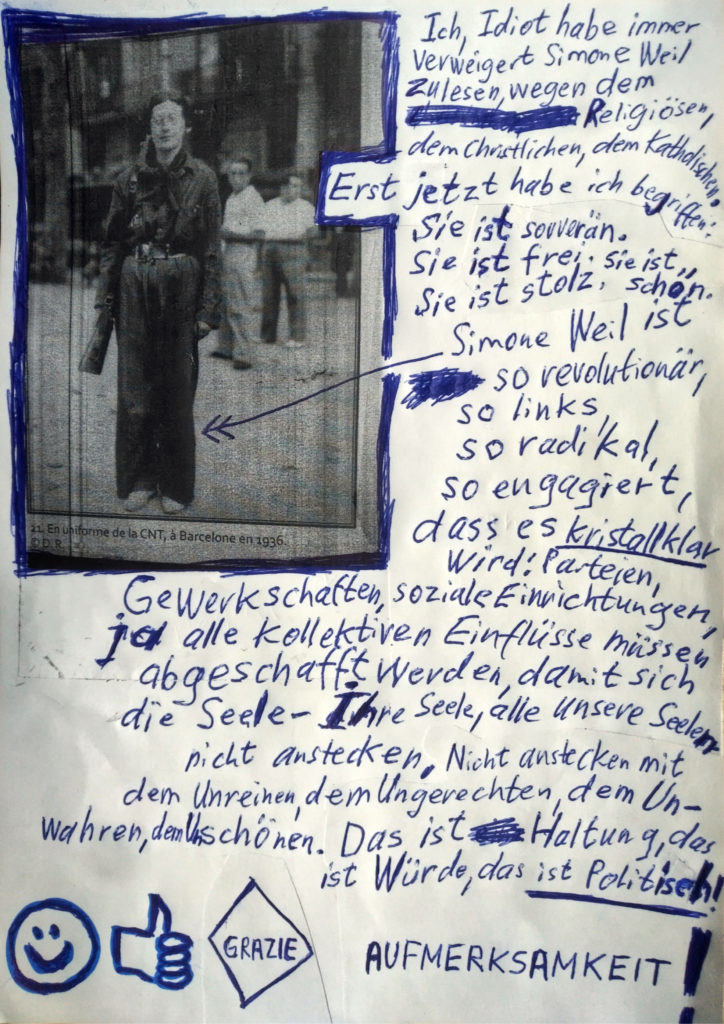 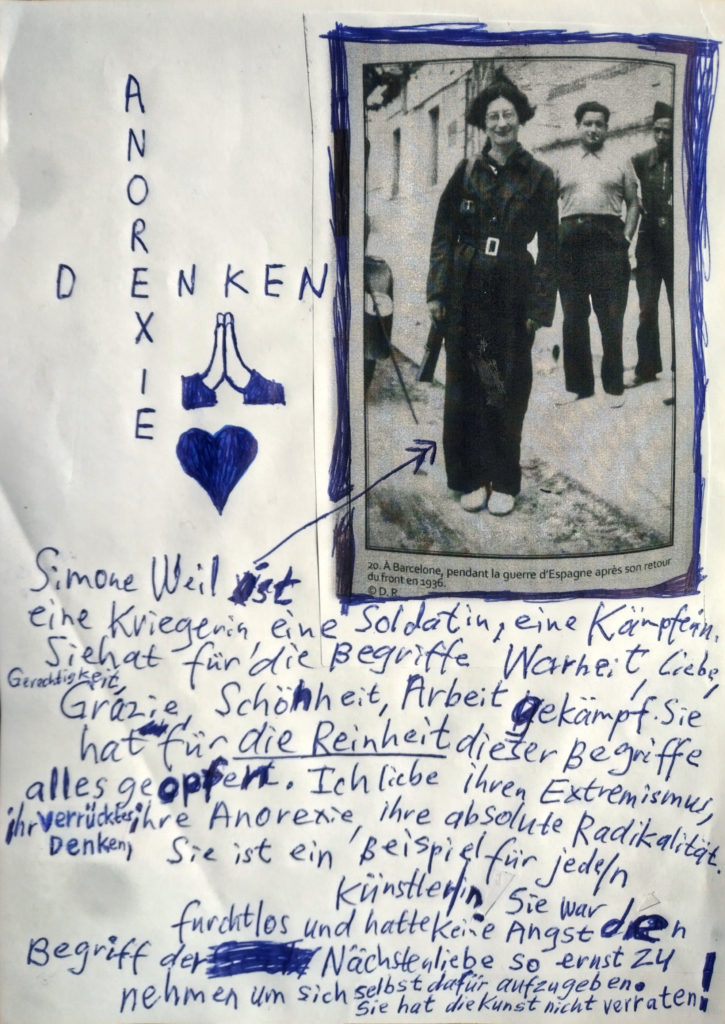 Thomas Hirschhorn, “SW ANNABELLE” Contribution for Annabelle Magazine / Corona-Kunstspezial “All by Myself”, April 2020

A ruin is a form, it is an eternal form. A ruin – as a form in the world, in this fragm

ented world – is to consider as a constitutive element of time, the past, the momentaneous or the future time. A ruin shares with all other ruins the quality of being a ruin. Each ruin embodies

the dimension of time as such. Each ruin reaches out of time and signifies the ‘Eternal’. Each ruin says something, each ruin is the form of its own disaster. Each ruin has its specific reason for being a ruin and its own History in becoming a ruin. 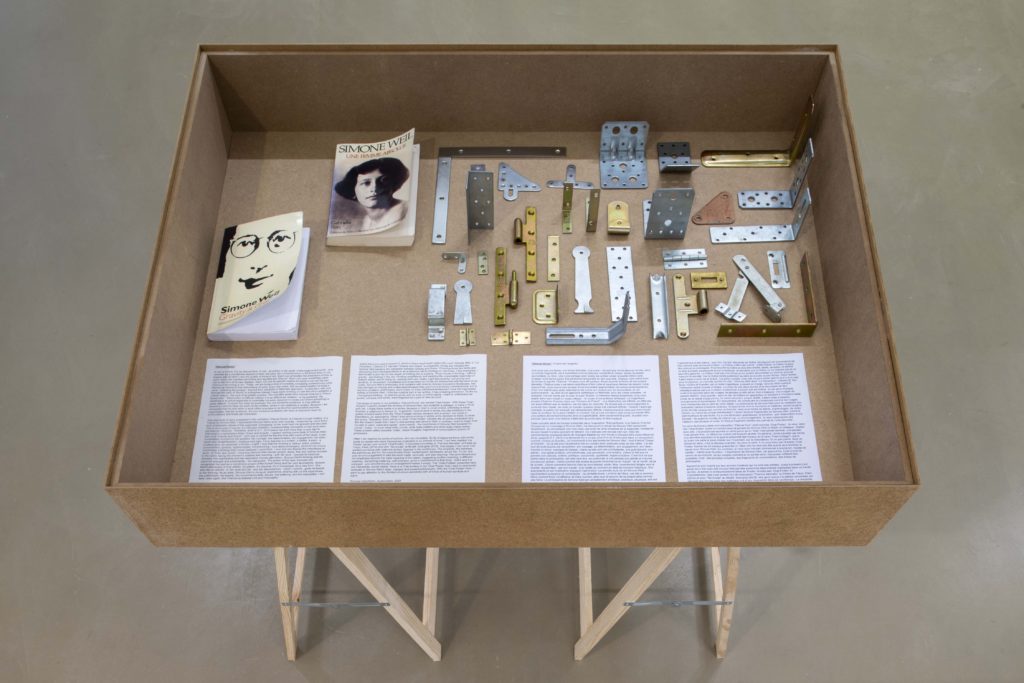 Today, we are living a time of incredibly increasing contemporary ruins. Hence my interest in this redundancy of ruins, every day anew, and my preoccupation in today’s ruins – including the antique – beyond their aesthetic or fetishistic approach. To give form with and through the topic of ‘Ruins’ is a longtime interest I have been working on with the will to establish a critical corpus – the core of an artistic practice. The beautiful quote from Antonio Gramsci’s “Prison Notebooks”: “Destruction is difficult; indeed, it is as difficult as creation”, is my guideline. His sentence is an encouragement to undertake my work, because to create and invent something is really difficult. To touch the other for example, the non-exclusive audience, is truly difficult, therefore I want to keep my work on the surface, where it can establish a contact. Because I am convinced that it’s only when a work offers a surface to be touched and therefore touches superficiality, that the audience, the non-exclusive audience can have a chance to reach its profoundness and finally get implicated.

This new body of work presented in the exhibition “Eternal Ruins” at Chantal Crousel Gallery, is a Tribute to Simone Weil. I discovered Simone Weil’s work only recently.

I knew her by name but a kind of simplistic refusal of the supposed ‘Christianity’ of her work kept me ignorant and reluctant. This is no excuse of course, but Georges Bataille’s condescending comments on her work were perhaps an influence. Therefore, when E.A.T. 2019 asked me a bit more than a year ago to intervene in a symposium titled ‘Grace and Gravity’, I started reading some texts of Simone Weil – first of all “Gravity and Grace” – and was in contact for the first time with some of her ideas. I was immediately touched by her position, her courage, her determination, her engagement, her style – harsh and straightforward, mystique and logic. I love that she is a soldier, a healer, a saint – a profane saint, an extremist, a thinker, a light. I love that her thinking is radical, entire, political, concentrated, spiritual, hypercomplex. It’s everything I love about philosophy, which to me means confronting a thinking that

I never believed I could think. I love that she flashes the importance of ‘work’, of ‘truth’ and ‘purity’. I love how Simone Weil stands upright, alone, free and openly directed to the world, facing the moment’s realities and reaching – with her work – beyond its historical moment. Her exemplarity and her dedication impose admiration. Simone Weil’s thinking and life stand for strength and vulnerability – the real power. The power of the soul, because she recognized the soul as a constitutive power of the human being and her own as powerful. Simone Weil’s philosophy is truly artistic, it’s plastic, it’s physical, it’s in movement, it’s a new form. She acts like an activist – in her work and life – and her absoluteness – which I admire – gives its beauty to her thinking. As an artist, Simone Weil is doing an experience, sharing with us this experience, the unthinkable, the beauty, the incommensurable, the joy, the suffering, and the impossible. I see here, once again, the ‘Friendship between Art and Philosophy’.

For years I was using the term ‘Grace’ in my work and followed the motto ‘counting on Grace’ in moments of loss, doubt and exhaustion, as recently with the “Robert Walser-Sculpture”. Every year I wrote it down as one of my New year’s resolutions:
“I need to be touched by Grace doing my work”. Therefore, the notion of Grace counts for me, and I always want to cut openings for Grace in my work. Grace establishes itself – out of Art. These ‘Moments of Grace’ give testimony to Art’s power as a transformatory act. Grace offers itself – from itself. Grace cannot be planned or provoked, and I must be awake, alert, sensitive and pay attention to touch Grace.
I need to accept its precariousness and uncertainty, and acknowledge that Grace cannot be measured or secured. Grace is not something to document and cannot account for a result. Grace clearly stands beyond success or failure, Grace can appear in failure too. “Grace fills empty spaces but can only enter where there is a void to receive it, and it is Grace itself which makes this void” (Simone Weil, in
“La Pesanteur, Cahiers 2”). Her text “Gravity and Grace” is a beautiful, strong and charged text. Simone Weil explains the interaction between Gravity and Grace. Choosing these two terms and discussing their interdependence is an audacious call for thinking on one’s own. I feel implicated, I feel invited to join her on the clouds of thinking she is building. Those clouds of thinking – without gravity – are floating in the sky. Floating weightlessly and resisting the unavoidable heaviness of today’s reality, and in doing so, creating their own reality. Light but powerful, convincing and dynamic. In movement. Constituted and evaporated as clouds are transported with the wind of our reality. Simone Weil’s philosophy is to compare with Antonio Gramsci’s powerful Notebooks. Are they perhaps so moving and unalienated because they aren’t conceived as a finished book, but in the form of letters, anthologies, short notes, or even unfinished sentences? I love the fragmented writing of Simone Weil, I love the mystical part in her writing, it has a healing dimension, it’s the try – throughout thinking – to heal the world, and as such, is encouraging. I want to understand her quotes, phrases and words, each fragment as a part of ‘eternal ruins’.

The series of works in my exhibition “Eternal Ruins” are named ‘Chat-Poster’. With these ‘Chat-Posters’ I want to contact the thinking of Simone Weil, and establish a dialogue, or have a ‘Chat’ with her. I made these works in a series, because a ‘chat’ is never ended, a thinking is never finished, a cellphone is always on. In general,
I love to work in series (my last exhibition in the gallery showed works from the “Pixel-Collage”-series) because with a series I can insist on importance, on redundancy. What I love about working in series is the decision to finish, to close the series. Therefore, there will be no other “Chat-Poster” besides the 23 works presented here. But this doesn’t mean that I want to end working with Simone Weil. In contrary I want to begin from my side to claim, insist and repeat – even heavily – the importance of Simone Weil because it’s crucial – today – to know what really counts, what really matters and what really makes sense. These posters reflect possible ‘chats’, virtual thoughts, fragments of conversations, pieces of philosophy.

Often I am inspired by works of authors, who are not artists. So far it happened twice with works made by people who were themselves implicated in an artwork of mine.

I can here mention my ‘Poster’-series’ and current ‘Chat-Poster’. It occurred concretely at “Flamme éternelle” at Palais de Tokyo, Paris (2014) and with “Re-Sculpt” at McaM, Shanghai (2018), that people I had never met worked out forms with materials at their disposal in the workshops. The simplicity, the easiness, the pertinence, the fun, the superficiality those ‘workshopers’ developed, struck me. To me, this was an encouragement to take the work made, seriously, and was inspiring. The commitment and the emptiness remove the initial meaning of the object, suggesting another meaning, a different meaning. Something made big, self-enlarged, gives a commitment to that thing – that’s why it is enlarged – and simultaneously an enlargement makes it empty. The ‘Chat-Posters’ presented here are inspired by ‘social-media’, there is a Chat-surface in the ‘Chat-Poster’ that I want to exclusively dedicate to Simone Weil’s deep, charged and powerful philosophy. With the ‘Chat-Poster’-form, I want to pay attention to the illimited emoticon-sensitivity with all kinds of human-symbols and signs.

OVERVIEW Since 2019 at the Engadin Art Talks, Thomas Hirschon has intensively engaged with Simone Weil. The denʞkollektiv thanks Thomas to present seven art works: (1) Me, She, (2) Simone Weil Map, (3) Médaillon, (4) Cover for ‘Die Weltwoche’, (5) My Dreams, (6) SW Annabelle, and (7) Eternal Ruins. For more information visit: www.thomashirschhorn.com (1) ME,

Isabella is a lecturer in Religious Studies at the University of Kiel. She was previously lecturing at the universities of Würzburg, Erfurt and Jena. She studied Greek and Latin Philology as well as Philosophy in Würzburg, Thessaloniki and Padova. She received her MA in Ancient Greek from the University of Würzburg and her PhD in