In this research area the focus is on providing a solid mathematical basis for the algebraic structure of quantum field theory regarded as a series over Feynman graphs, in a way that allows to combine this algebraic structure with analytic and algebra-geometric techniques to allow for progress.

Key aspects of this approach

This aspect of the research program is concerned with higher algebraic structures in QFT and, more generally, in theoretical and mathematical physics.

Lie groups and Lie algebras are the structures underlying most of contemporary fundamental physics, from the standard model of particle physics to Einstein’s theory of general relativity. Recent developments have shown that higher algebraic structures in form of
L∞-algebras could play an important role for the physics of the 21st century.

Integration into the RTG 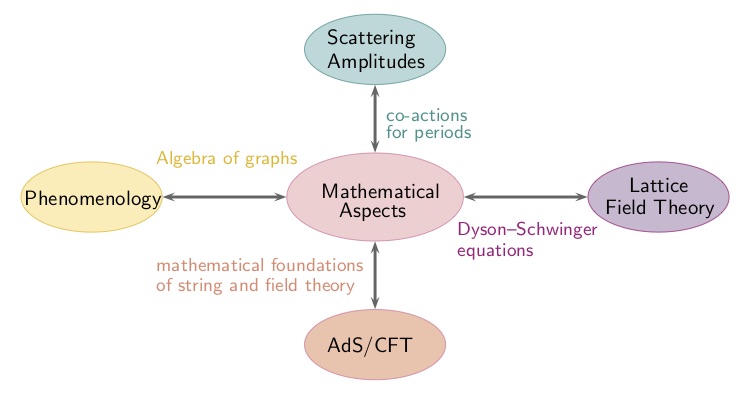 This research topic integrates well into the RTG as it provides mathematical foundations for phenomenology, scattering amplitudes, the AdS/CFT correspondence and for perturbative expansions in terms of Feynman diagrams.
In addition, Dyson-Schwinger equations provide a link to the non-perturbative physics of lattice field theory. The spacetime formulation provided by double field theory is a promising framework in order to understand the principles underlying the “double copy” construction for the computation of amplitudes.